Happy New Years everyone!  I hope you all had a blessed Christmas and a happy New Years!  I just love New Years, there is really something to be said about starting fresh with a clean slate.  So much to look forward too, it really does renew the spirit!!!  It sounds like I am not the only one who caught the Organizing bug.  I don't know if mine is due to my nesting kicking in or what but I have been obsessed lately with Organizing Blogs like you wouldn't believe!  My Pinterest account is going wild with Organizing ideas!!!  The next few posts I would like to capture our Christmas holiday season before those memories start to fade and the organizing and nursery planning start to take over!  Are your Christmas decorations packed away just yet?  We haven't started yet, we were hoping to leave everything up for Jillian's 2nd Birthday party this weekend, however, our tree is looking extremely mangy right now with each passing day.  I am sure the fire department would consider our house a major fire hazard! Jillian is a very lucky girl, she got to eat Breakfast with Santa not once, but twice this year!!!  We were very lucky to have been able to coordinate a Breakfast with Santa with each set of Grandparents which was such a treat for Jillian.  Our first Breakfast with Santa took place at the Strongsville Recreation Center.  They did an amazing job with the kids and we had so much fun too as parents watching all of them run around!  My sister also was able to join us with her girls which made it extra special! The event started off with Breakfast served at each table for the families.  We all ate and then participated in a raffle prize for toys.  Afterwards, we anxiously awaited Santa's big arrival!!!  Finally the big man showed up and every one applauded and cheered as he walked through the room, waving as he went.  Afterwards, a major line formed to get a picture with the man himself which took quite some time.   Over an hour, perhaps?  Poor Jeff and my sister's husband waited in line for us while my sister and I tried entertaining the girls.  A few of the "elves" sang songs and read books with the kids which helped distract them a bit as we waited for pictures with Santa.  Jillian and my sister's daughter, Nicole, enjoyed dancing around to the songs together which was so adorable!  Finally it was our turn to take a picture with Santa and Jillian was just not having it.  She cried and cried so we attempted a family picture with a crying, stiff-arming toddler.  I wish we had a better picture besides this side shot, I am sure her face would have been priceless.  In total this year, we saw Santa three times and the final time Jillian at least didn't cry when she got near him.  Jillian does love Santa, but from afar!  (We were in a bit of a hurry that morning and bolted out the door without our good camera.  Ugh!  So Iphone pictures it is.) 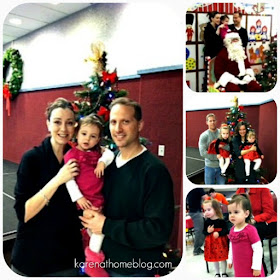 Our second Breakfast with Santa this holiday season was at Lake Farm Park with Jeff's parents.  It was such an adorable place! 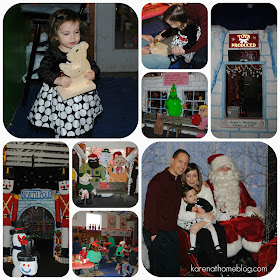 The Farm park was fully decked out with Christmas decorations and a Santa's Workshop for the children to make a toy after breakfast.  Jillian had a blast making a little wooden bear which Santa's elves helped her put it together. 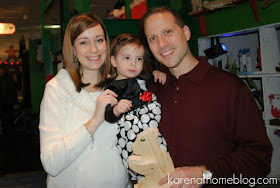 Jillian was still not a fan of Santa up close but this was the one and only time this year we actually got a photo of her not crying on Santa's lap.  This was also the event that I was bound and determined to get a good picture of Jillian in her Christmas dress for our Christmas card.  Luckily I captured just the right shot in front of one of the Christmas trees! 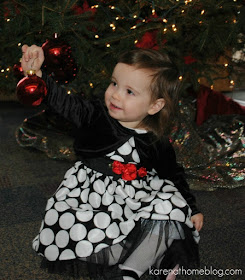 The Lake Farm park is a cute little park with lots of farm animals for the kids to pet.  This was our second time there, the first time was in the Fall and we had such a blast visiting with all of the animals.  Jillian loved it, we can't wait to go back again this Summer.

Thank you so much for taking the time to leave a comment!